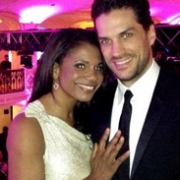 Audra and husband Will Swenson celebrated President Obama’s inauguration by performing at the Human Rights Campaign’s Out for Equality Ball in Washington, D.C. The evening also featured performances by pop icon Cyndi Lauper, American Idol contestant and Rent vet Frenchie Davis, and the Gay Men’s Chorus of Washington, D.C. A passionate supporter of the LGBT community and marriage equality, Audra was honored by the HRC in 2009 with their Ally for Equality Award.