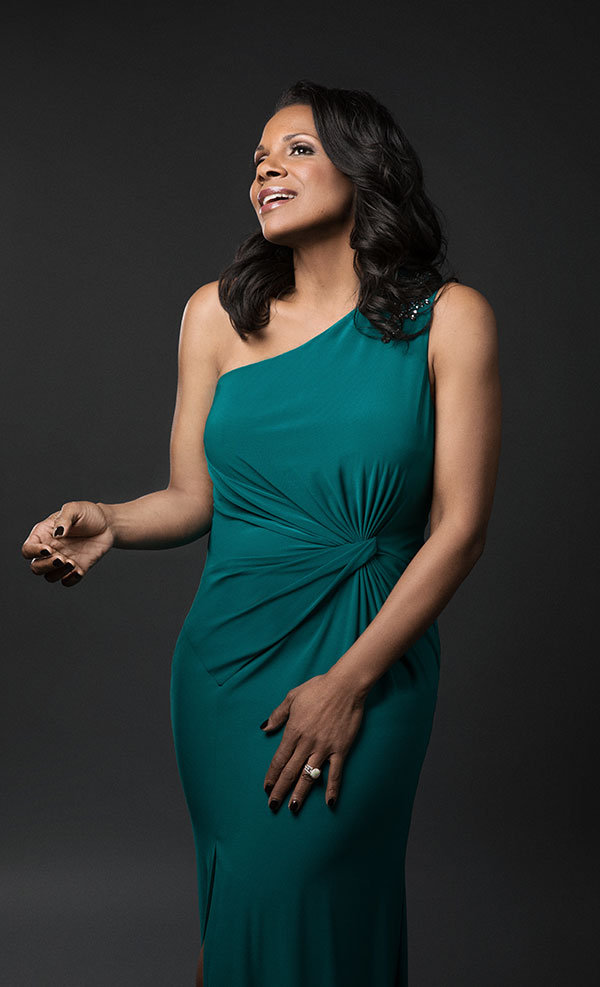 Audra McDonald is unparalleled in the breadth and versatility of her artistry as both a singer and an actor. The winner of a record-breaking six Tony Awards, two Grammy Awards and an Emmy Award, in 2015 she was named one of Time magazine’s 100 most influential people and received a National Medal of Arts—America’s highest honor for achievement in the field—from President Barack Obama. Blessed with a luminous soprano and an incomparable gift for dramatic truth-telling, she is as much at home on Broadway and the opera stage as in her film and television roles. Alongside her theatrical work, she maintains a major career as a concert and recording artist, regularly appearing at the world’s foremost venues.

Born into a musical family, McDonald grew up in Fresno, California, and received her classical vocal training at New York’s Juilliard School. A year after graduating, she won her first Tony Award for Best Performance by a Featured Actress in a Musical for Carousel at Lincoln Center Theater (1994). Over the next four years, she received two additional Tony Awards in the featured actress category for her performances in the Broadway premieres of Terrence McNally’s Master Class (1996) and Ragtime (1998), making an unprecedented total of three Tony Awards before the age of 30. In 2004 she won her fourth Tony, starring alongside Sean “Diddy” Combs in A Raisin in the Sun, and in 2012 she won her fifth—and her first in the leading actress category—for her title role in The Gershwins’ Porgy and Bess. In 2014 she made Broadway history and became the Tony Awards’ most decorated performer when she won her sixth award for her portrayal of Billie Holiday in Lady Day at Emerson’s Bar & Grill—the role that also served as the vehicle for her Olivier Award-nominated 2017 debut in London’s West End. As well as setting the record for most competitive wins by an actor, she also became the first person to receive awards in all four acting categories. McDonald’s other theater credits include The Secret Garden (1993), Marie Christine (1999), Henry IV (2004), 110 in the Shade (2007), her Public Theater Shakespeare in the Park debut in Twelfth Night (2009), Shuffle Along, or, The Making of the Musical Sensation of 1921 and All That Followed (2016) and Frankie and Johnny in the Clair de Lune (2019).

McDonald made her opera debut in 2006 at Houston Grand Opera, where she starred in a double bill: the monodrama La voix humaine by Francis Poulenc and the world premiere of Send by Michael John LaChiusa. She made her Los Angeles Opera debut in 2007 starring alongside Patti LuPone in John Doyle’s production of Kurt Weill’s Rise and Fall of the City of Mahagonny. The resulting recording won McDonald two Grammy Awards, for Best Opera Recording and Best Classical Album.

On the concert stage, McDonald has premiered music by Pulitzer Prize-winning composer John Adams and sung with virtually every major American orchestra—including the Boston Symphony, Chicago Symphony, Cleveland Orchestra, Los Angeles Philharmonic, National Symphony, New York Philharmonic, Philadelphia Orchestra and San Francisco Symphony—under such conductors as Yannick Nézet-Séguin, Sir Simon Rattle and Esa-Pekka Salonen. She made her Carnegie Hall debut in 1998 with the San Francisco Symphony under the baton of Michael Tilson Thomas in a season-opening concert that was broadcast live on PBS. Internationally, she has sung at London’s BBC Proms (where she was only the second American in more than 100 years invited to appear as a guest soloist at the Last Night of the Proms) and at the Théâtre du Châtelet in Paris, as well as with the London Symphony Orchestra and Berlin Philharmonic.

It was the Peabody Award-winning CBS program Having Our Say: The Delany Sisters’ First 100 Years that first introduced McDonald to television audiences as a dramatic actor. She went on to co-star with Kathy Bates and Victor Garber in the lauded 1999 Disney/ABC television remake of Annie, and in 2000 she had a recurring role on NBC’s hit series Law & Order: Special Victims Unit. After receiving her first Emmy nomination for her performance in the HBO film version of the Pulitzer Prize-winning play Wit, directed by Mike Nichols and starring Emma Thompson, McDonald returned to network television in 2003 in the political drama Mister Sterling, produced by Emmy Award-winner Lawrence O’Donnell, Jr. (The West Wing) and starring Josh Brolin. In early 2006 she joined the cast of the WB’s The Bedford Diaries, and over the next season she had a recurring role on NBC’s television series Kidnapped. In 2008 she reprised her Tony-winning role in A Raisin in the Sun, in a made-for-television movie adaption that earned her a second Emmy Award nomination. From 2007 to 2011, she played Dr. Naomi Bennett on the hit ABC medical drama Private Practice. In 2013, her critically acclaimed performance as the Mother Abbess in NBC’s live telecast of Rodgers and Hammerstein’s The Sound of Music, opposite Carrie Underwood as Maria, was watched by an estimated 18.5 million people across America. McDonald received a fourth Emmy nomination for her role in HBO’s film special of Lady Day at Emerson’s Bar & Grill in 2016. Having first appeared as U.S. attorney Liz Lawrence on CBS’s legal drama The Good Wife in 2009, in 2018 she joined the cast as a season regular of The Good Fight, now available on Paramount+. McDonald stars alongside Taylor Schilling and Steven Pasquale in The Bite, a six-episode pandemic-themed drama co-produced by Spectrum Originals and CBS Studios.

McDonald also makes regular television appearances as a performer, host, and talk-show guest. A familiar face on PBS, she has headlined telecasts including an American Songbook season-opening concert, a presentation of Sondheim’s Passion, a Rodgers and Hammerstein tribute concert titled Something Wonderful, and five galas with the New York Philharmonic: a New Year’s Eve performance in 2006, a concert celebrating Sondheim’s 80th birthday, Carnegie Hall’s 120th anniversary concert, One Singular Sensation! Celebrating Marvin Hamlisch, and, most recently, Sweeney Todd. She was also featured in the PBS television specials A Broadway Celebration: In Performance at the White House and A Celebration of American Creativity, singing at the request of President Barack Obama and First Lady Michelle Obama. McDonald has appeared three times on the Kennedy Center Honors; been profiled by 60 Minutes, Today, PBS NewsHour, and CBS Sunday Morning; guest co-hosted The View with Barbara Walters; and been a guest on The Late Show with Stephen Colbert and David Letterman; The Tonight Show with Jimmy Fallon; Late Night with Jimmy Fallon; The Late, Late Show with James Corden; The Colbert Report; CBS This Morning; Live with Kelly and Ryan, NewsNation with Tamron Hall; PoliticsNation with Al Sharpton; Iron Chef America; The Megan Mullally Show; The Rosie O’Donnell Show; RuPaul’s Drag Race; The Tavis Smiley Show; The Talk; The Wendy Williams Show; and The Nightly Show with Larry Wilmore. In 2012, McDonald was named the new official host of the PBS series Live From Lincoln Center, and she won her first Primetime Emmy Award for hosting the Creative Arts Special Program in 2015, having previously been nominated in 2013. She has also performed on numerous Tony Awards telecasts; in 2013, she closed the show by performing a rap duet with Neil Patrick Harris.

McDonald launched her film career with Seven Servants in 1996; her list of credits has since grown to include The Object of My Affection (1998), Cradle Will Rock (1999), It Runs in the Family (2003), The Best Thief in the World (2004), She Got Problems (2009)—a mockumentary movie musical written, starring, and directed by her sister, Alison McDonald—and Rampart (2012). She recently appeared opposite Meryl Streep in Ricki and the Flash (2015), in the movie-musical Hello Again (2017), and—as Madame de Garderobe—in Disney’s live-action Beauty and the Beast (2017).

As a recording artist, McDonald has enjoyed a long relationship with the Nonesuch label, interpreting songs from the classic (Gershwin, Arlen, and Bernstein) to the contemporary (Michael John LaChiusa, Adam Guettel, and Ricky Ian Gordon). The New York Times named her first Nonesuch album, 1998’s Way Back to Paradise, as Adult Record of the Year. Following the bestselling How Glory Goes in 2000 and Happy Songs in 2002, she released the 2006 album Build a Bridge, stretching her repertoire to include songs by the likes of Randy Newman, Elvis Costello/Burt Bacharach, Rufus Wainwright, and Nellie McKay. Sing Happy, recorded live with the New York Philharmonic, was released in 2018 by Decca Gold, marking McDonald’s first solo recording with full orchestra. Her ensemble recordings include the acclaimed EMI version of Bernstein’s Wonderful Town conducted by Sir Simon Rattle, the New York Philharmonic release of Sondheim’s Sweeney Todd, and Dreamgirls in concert, as well as the first recording of Rodgers and Hammerstein’s Allegro and Broadway cast albums of Carousel, Ragtime, Marie Christine, 110 in the Shade, The Gershwins’ Porgy and Bess, and Lady Day at Emerson’s Bar & Grill. She is also featured on a number of audiovisual recordings available on DVD and Blu-ray, including Sondheim! The Birthday Concert; Christmas with the Mormon Tabernacle Choir and Orchestra at Temple Square; Weill—Rise and Fall of the City of Mahagonny; Bernstein—Wonderful Town; Audra McDonald: Live at the Donmar, London; and My Favorite Broadway: The Leading Ladies.

McDonald’s other theater accolades include five Drama Desk Awards, five Outer Critics Circle Awards, an Ovation Award, a Theatre World Award, Roundabout Theatre’s Jason Robards Award for Excellence in Theatre, a Rockefeller Award for Creativity, and the Drama League’s 2012 Distinguished Performance and 2000 Distinguished Achievement in Musical Theatre Awards. Besides her six Tony wins, she received nominations for her performances in Marie Christine and 110 in the Shade, five NAACP Image Awards nominations, and an Olivier Award nomination from her West End debut in Lady Day at Emerson’s Bar and Grill.

As one of today’s key cultural figures, McDonald was inducted into Lincoln Center’s Hall of Fame as a member of its inaugural class, which included Louis Armstrong, Plácido Domingo, Yo-Yo Ma, Leontyne Price, and Harold Prince, and named Musical America’s “Musician of the Year,” a title previously bestowed on such luminaries as Leonard Bernstein and Beverly Sills. She has been honored by two of America’s leading academic institutions, receiving the prestigious 2018 Eugene McDermott Award in the Arts at MIT, and an honorary doctorate from Yale University.

In addition to her professional obligations, McDonald is a passionate advocate for equal rights, LGBTQ causes, and underprivileged youth. Her outspoken activism for marriage equality helped put the issue on the national agenda. In 2009, she joined Twitter to promote the cause, using the Twitter handle @AudraEqualityMc, and in 2011 she joined pro-equality marchers in Albany to lobby New York state senators in the days leading up their groundbreaking vote for legalization. In 2012, she and her now husband, actor Will Swenson, received PFLAG National’s Straight for Equality Award. McDonald was featured in marriage equality and anti-bullying campaigns for Freedom to Marry, NOH8, and PFLAG NYC. The Human Rights Campaign, America’s largest civil rights organization for LGBTQ equality, recognized her work with its 2009 Ally for Equality and 2018 National Equality Awards.

As a member of the Covenant House International Board of Directors, which oversees programs for homeless young people in 27 cities in six countries across the United States, Canada, and Latin America, McDonald actively devotes her time and talents to spreading awareness about at-risk youth. For her ongoing contribution to the cause, she was honored in 2017 alongside Chelsea Clinton, Gayle King, and Blake Lively as one of Variety magazine’s “Power of Women” and received Covenant House’s Beacon of Hope Award the following year.

A dog lover, McDonald adopted her canine companion, Butler, from Eleventh Hour Rescue, a volunteer-based, non-profit organization that saves dogs from death row. Of all her many roles, her favorites are the ones performed offstage: passionate advocate for equal rights and homeless youth, wife to actor Will Swenson, and mother.