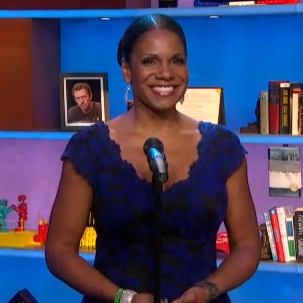 Audra returned to The Colbert Report this week to help Stephen Colbert marry a couple whose ceremony was canceled due to the government shutdown. Originally scheduled to be married at the Jefferson Memorial, Mike Cassesso and MaiLien Le were married by Colbert on-air. Following their “I-dos,” Audra provided the vocals for their first dance as man and wife: Billy Idol’s “White Wedding.” Watch the video here.
Audra can also be heard in New York this week as part of her 22-city North American concert tour when she performs tomorrow at the Kupferberg Center at Queens College.
News
0 Facebook Twitter