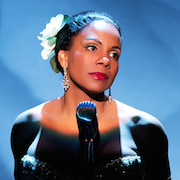 in the press, Audra has been nominated two awards for her performance in HBO’s special Lady Day at Emerson’s Bar and Grill. The celebrated actress and singer was recognized by the Screen Actors Guild in the category of Outstanding Performance by a Female Actor in a TV Movie or Miniseries, and was nominated for an NAACP Image Award for Outstanding Actress in a Television Movie, Limited-Series or Dramatic Special.

Audra first performed the role of Billie Holiday on Broadway in 2014, and later won her sixth Tony Award for the same production.

Lady Day at Emerson’s Bar and Grill was filmed live at Café Brasil in New Orleans and aired on HBO in March 2016. Stream Lady Day online and tune in to the SAG Awards on January 29, 2017 and the NAACP Image Awards on February 11, 2017.