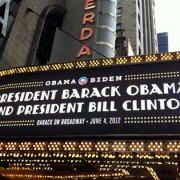 On Monday June 4 Audra will join President Barack Obama and former President Bill Clinton along with a host of other Broadway luminaries at the New Amsterdam Theatre for “Barack on Broadway,” a fundraiser for the President’s re-election campaign. Audra will appear alongside other stars of the stage and screen, including Patti LuPone, Angela Lansbury, Tony Kushner, Megan Hilty, Cheyenne Jackson, Stockard Channing, Kerry Butler, Neil Patrick Harris, and James Earl Jones, among others.