Audra’s new album, Go Back Home, to be released on Nonesuch on May 21 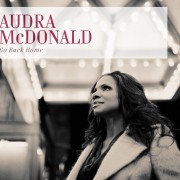 Nonesuch releases Audra’s first solo album in seven years, Go Back Home, on May 21. After four seasons spent in Los Angeles playing Dr. Naomi Bennett on ABC’s hit medical drama Private Practice, Audra returned to New York and Broadway last year, winning her record-tying fifth Tony Award for her role in The Gershwins’ Porgy and Bess. With Go Back Home, the Grammy Award-winning soprano, whose voice Stephen Sondheim has hailed as “one of the glories of the American theater,” makes her highly anticipated return to recording, presenting her most personal album to date.  Many of the selections on Go Back Home are by composers with whom McDonald has long been associated (Guettel, LaChiusa, Rodgers & Hammerstein, and Sondheim, among others), while some songs, including the Kander and Ebb title track, are by names that are relatively new to her repertoire. In addition, McDonald continues her tradition of championing works by an emerging generation of composers, represented on this recording by Adam Gwon, Heisler and Goldrich, and Will Reynolds. The album was produced by Doug Petty, who also produced McDonald’s 2006 release Build a Bridge; musical director Andy Einhorn conducted the ensemble. Go Back Home is available to pre-order at nonesuch.com and includes an instant download of the title track plus a limited-edition autographed print as well as a download of the complete album available starting release day.

On Friday, May 24, three days after the album’s release, McDonald headlines and hosts “Audra McDonald In Concert: Go Back Home,” a national PBS telecast presented by the Emmy Award-winning series Live From Lincoln Center (check local listings). The program is being recorded live to tape on Thursday, May 9, when McDonald performs songs from the album as well as other personal favorites in concert at Avery Fisher Hall. Last fall, McDonald was named the official host of the acclaimed television series, adding a new chapter to her long history with the Lincoln Center campus, where she attended The Juilliard School and won her first Tony for her performance in Carousel at Lincoln Center Theater.