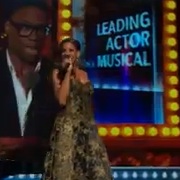 After presenting the first award of the night to Courtney B. Vance for “Best Featured Actor in a Play,” Audra McDonald returned to the stage of Radio City Music Hall at the close of 67th Annual Tony Awards for a surprise musical appearance with four-time Tony host Neil Patrick Harris. The pair performed a Tonys wrap-up rap based on Jay-Z and Alicia Key’s hit song “Empire State of Mind,” with new lyrics written specially for the occasion by Tony-winner Lin-Manuel Miranda and Tommy Kail. Click here to watch.

Shortly after the performance, Audra McDonald began trending worldwide on twitter, with people posting Vines and animated GIFs from the telecast, and today the Associated Press named Audra and Neil’s closing duet one of the top five moments at this year’s Tony Awards.

All of this comes just days after her new album for Nonesuch Records, Go Back Home, debuted in the number two position on Billboard’s Heatseekers chart and made the Billboard 200.