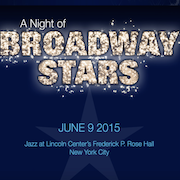 From now until Thursday, June 4, visit Charitybuzz.com to bid on the opportunity to meet Audra at the Covenant House’s A Night of Broadway Stars Gala at Jazz at Lincoln Center’s Frederick P. Rose Hall. The event, directed by lyricist and composer Neil Berg, will feature performances from Broadway’s biggest stars as they join Covenant House in celebrating the homeless kids who are now independent young adults and those who are still trying to find their way.  In a statement about the event, Audra said, “The more I’ve learned about what Covenant House is doing for homeless all over the country and around the world, the more excited I’ve become to join this powerful movement on behalf of homeless kids.