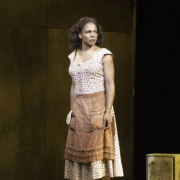 After 322 performances, The Gershwins’ Porgy and Bess will close on September 23. The Tony-winning production premiered at the American Repertory Theater last summer and officially opened on Broadway in January 2012 with the New York Times exclaiming “For devastating theatrical impact, it is hard to imagine any hurricane matching the tempest that is the extraordinary Audra McDonald. She is, in a word, great.” This June, Audra was awarded her record-tying fifth Tony for “Best Performance by an Actress in a Leading Role in a Musical” for her heartfelt portrayal of the downtrodden Bess. For more information on the production and to purchase tickets, visit www.porgyandbessonbroadway.com.