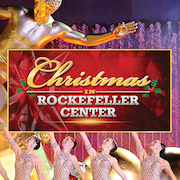 The 76-foot Norway Spruce tree, estimated to be more than 75 years old, will be decorated with 45,000 energy-efficient multicolored LED lights and topped with a 9½-foot-wide LED-lit Swarovski crystal star.

The following night, audiences can see Audra as Mother Abbess opposite Carrie Underwood as Maria, Stephen Moyer as Captain von Trapp, Laura Benanti as Elsa Schrader, and Christian Borle as Max Dettweiler in NBC’s live production of The Sound of Music at 8/7 CT.