“The Sound of Music” soundtrack scheduled for December 3 release 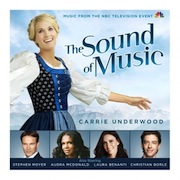 On December 3, Sony Masterworks will release the cast recording of The Sound of Music two days before NBC’s live broadcast of Rodgers & Hammerstein’s beloved musical.  “The Sound of Music (Music from the NBC Television Event)” will include studio recordings of all of the musical numbers performed by the cast members in the December 5 live broadcast.

Audra sings the role of Mother Abbess in a cast that sees Carrie Underwood as Maria von Trapp, Stephen Moyer as Captain Georg Von Trapp, Christian Borle as Max Detweiler, and Laura Benanti as Elsa Schrader. The NBC presentation features music from the original Broadway production, including such classics as “My Favorite Things,” “Do-Re-Mi,” “Sixteen Going on Seventeen,” and “Climb Ev’ry Mountain.”