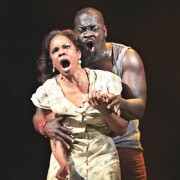 On May 18 the Drama League bestowed its annual Distinguished Performance Award to  Audra for her role in the Broadway revival of The Gershwins’ Porgy and Bess, currently running at the Richard Rodgers Theatre. The announcement was made at a ceremony at the Marriott Marquis in Times Square. Audra was among 40 other nominees considered for the Drama League’s honor, which is given to an artist only once during his or her career.

Audra also received the Outer Critics Circle award in the category of “Outstanding Actress in a Musical” for her portrayal of Bess in The Gershwins’ Porgy and Bess.