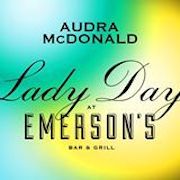 Written by Lanie Robertson and directed by Lonny Price, Lady Day at Emerson’s Bar and Grill opened at the Circle in the Square Theatre in New York City in 2014. Audra reprises the role for this 12 week limited run on the West End.

Performances run through September 9 at the Wyndham’s Theatre. Visit LadyDayWestEnd.com for tickets and more information.