Audra McDonald joins the cast of “The Good Fight” 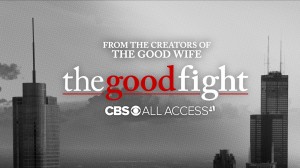 Reprising her popular role of Liz Lawrence from “The Good Wife,” Audra McDonald joins the cast of “The Good Fight” on CBS All Access.  In the show’s second season of the network’s first original drama series, Lawrence is revealed as the ex-wife of Adrian Boseman (Delroy Lindo), and the former couple is forced to face many of their unresolved issues.

Executive producers Robert and Michelle King are “thrilled that Audra McDonald will return to the fictional Chicago of ‘The Good Fight.’ Audra brings intelligence, strength, and wit to Liz Lawrence, the character she developed in the fourth season of ‘The Good Wife.’” As a series regular, McDonald joins the cast alongside Emmy Award winner Christine Baranski, Cush Jumbo, Rose Leslie, Delroy Lindo, Sarah Steele and Justin Bartha.