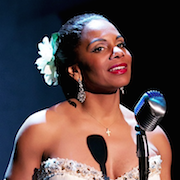 The Drama League announced today that Lady Day at Emerson’s Bar & Grill has been nominated for the 2014 Drama League Award in the category of “Outstanding Revival of a Broadway or Off-Broadway Musical.”

In 2012, Audra received the Drama League’s Distinguished Performance Award for her role as Bess in The Gershwins’ Porgy and Bess. This award is given to an artist only once during his or her career.