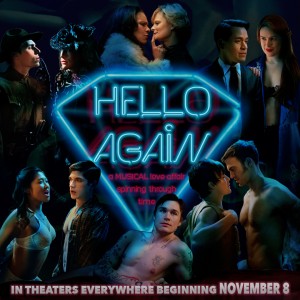 One hundred years. Ten love affairs. One city of lost souls. HELLO AGAIN explores a daisy chain of New Yorkers slipping in and out of one another’s arms in 10 musical vignettes blurring the parameters of time, love, eroticism and exploitation. The film HELLO AGAIN is based on the Michael John LaChiusa stage musical of the same name. The inspiration for HELLO AGAIN is Arthur Schnitzler’s Der Reigen, a 120-year-old play so provocative and controversial in its time that it was banned from public performance for decades, before inspiring heated, even violent, responses from audiences.*